My name is Dr. Daniel Roberts and I am a psychologist from the year 2048. I have sent you this email from the future (Gmail is quite advanced in our time) in hopes to prevent a pandemic which I believe has the potential to destroy our precious human society. Around the year 2025, my colleagues and I noticed a trend in many of our young patients: many of our youth were displaying symptoms of apathy, boredom, and anhedonia. At first we believed we had simply discovered a new mood disorder that had not yet been classified. As the disorder which came to be known as “Global Yawning” became an accepted diagnosis, we noticed the rate of incidence was rising rapidly--too rapidly to be explained by the increased rate of testing. As the graph below clearly indicates, Global Yawning's rate of incidence is increasing exponentially, (probably the beginning of a logistic growth pattern, a pattern we expect to see from pandemics). 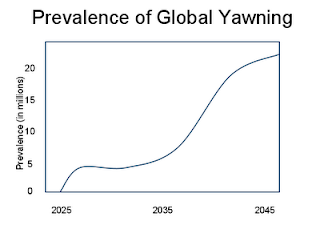 Persons suffering from GY erroneously believe that the world around them is boring. Yawners typically avoid any emotional or intellectual stimulation, as such activities which cause them to become confused. For instance, if my history is correct, youth of your time enjoy listening to rock and hip-hop music, watching action and comedy movies, and reading fiction thrillers. All of these activities have died out in 2048. For example, in our time, Webster's Dictionary is the most bought and read book. The most recent box office success was unedited security footage from a parking garage. The TV guide channel (which, of course, only lists itself) is the only show left on television. Recent college graduates seek jobs only in data entry or mail sorting. Interestingly, the musician John Mayer is still quite popular. The cruel nature of this disorder renders patients unwilling or unable to conceive of any more exciting forms of stimulation. People in 2048 are not actually entertained by these activities; they simply believe, despite our pleadings, that nothing more exciting actually exists.

We believe that Global Yawning could result in a complete breakdown in human culture: no great works of literature or art and no triumphs of engineering or design (for instance, space travel is far too exciting for Yawners). Thankfully, I believe I have discovered a cure.

We currently believe that Global Yawning is a result of decades of boredom, caused by boring books, boring movies, boring jobs, and boring hobbies. I thought that if past generations had found more excitement in the world around them, the desensitization that leads to GY might have been stopped. My colleagues and I looked for the most exciting things that were happening in the year 2011 and I discovered Brett Elizabeth Jenkins' poetry, which we find to be extraordinarily stimulating and the perfect antidote to Global Yawning.

Therefore, I, Dr. Daniel Roberts, implore you to read the poetry of Bejjie (as she is known our time). The future of the human race depends upon it!"

Posted by Brett Elizabeth Jenkins at 11:44 AM