Today is Independence Day, which means to me that I make a lot of tweets and status updates that are in all capital letters, like the founding fathers would have wanted. Please enjoy below what appears to be the most patriotic picture of all time.

When I was a senior in college, I was in a guys vs. girls competition with the history majors (I don't know how I got picked to do this) that was like Family Feud. The history professors polled the freshmen with questions about the nation, and we had to name the top four or fiv 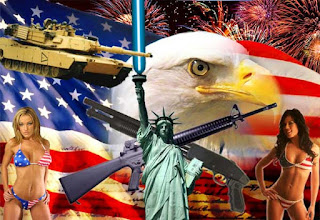 e responses for each question. The questions were relatively simple questions like "Name an amendment" (which I understand is not a question), "Who was one of our founding fathers" and things of that nature. The girls won because we could think like freshmen. The number two answer for "Who was one of our founding fathers" was "Abraham Lincoln." I don't think this reflects poorly on my university in particular, but probably just on eighteen-year-olds everywhere.

That's my patriotic story for the day. But I also have some news unrelated to liberty and blowing things up, except in the metaphorical sense.

I got a poem accepted today by Bluestem Magazine that will be out sometime in September. It is, for your information, one of my many poems about lying on the floor and not wanting to get up. So you can look forward to that.

I also fell into a glamorous position blogging for

the brand new Specter Magazine, which will launch its maiden issue this fall. You guys, go and submit awesome things there so that you can help make the internet a magical place.

Now go and eat beef (if you're into that), drink a brewski, and look at people shoot stuff off and blow stuff up!
Posted by Brett Elizabeth Jenkins at 5:40 PM