On Writing to Authors You Love

I'll probably be posting every day in April as a means of coping with my procrastination. Writing a poem every day is a hard job. Or as Derrick Brown says in a Brett-Elizabeth-Jenkins approved comma splice-type thing, "Poetry is a tough racket, the bastard child of the arts."

On an unrelated note, if I were a rapper, my rap name would be Comma Splice.

Another noteworthy news item, but first a back story. In February my husband & I went to a Coffee House Press event in Minneapolis to meet some of the staff & drink sake (okay, mostly to drink sake), though we did meet some interesting people. Most of the people there were associated with Coffee House Press in some way or other, and they were awed by the fact that we had come based on an article Will read on the Huffington Post. A few clicks in cyber space and we found they had an event that week, so we went. While there, we won a drawing for 7 of their poetry books & one of their fiction books.

After reading the fiction book, Netsuke, by Rikki Ducornet, Will wrote & sent her a letter saying he liked the book. Today he received a letter back in the mail, addressed upside-down, handwriting almost as indecipherable as Will's own, with a nice little drawing on the page. The letter is now resting on our refrigerator door. 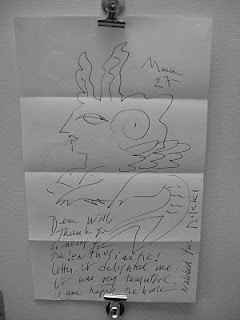 It reminds me of the time in high school that my friend Amanda wrote to Chuck Palahniuk, and he sent her back a whole box of goodies including, if I remember correctly, a hand-beaded necklace that said "Amanda + Chucky P."

My point? Write enthusiastic letters to authors you admire or whose books you enjoy. It doesn't happen often, and they will be delighted to get your letter. And you might even get something neat in return.
Posted by Brett Elizabeth Jenkins at 10:12 AM