First of all, thanks to Kathleen Kirk for tagging me in this blog tour thing, and an apology to Molly Sutton Kiefer, who asked me to do this several months ago and I said I would and then didn't. Oops! I'm not a bad person, I just get distracted by TV shows. The two writers I'm tagging to do posts about this next are Joe Stracci and Erica Anderson-Senter, two fantastic writers and fantastic friends. Joe recently published a novel, Whitney, which you should definitely check out. At his book launch, I fell over a table and got a massive bruise which I nicknamed "Shame Bruise." It was there for many weeks as a reminder of how dumb I am. Erica is going into her second term in Bennington's MFA program (!!) and her poems drink diesel and scratch wherever they want, even if they're in public. 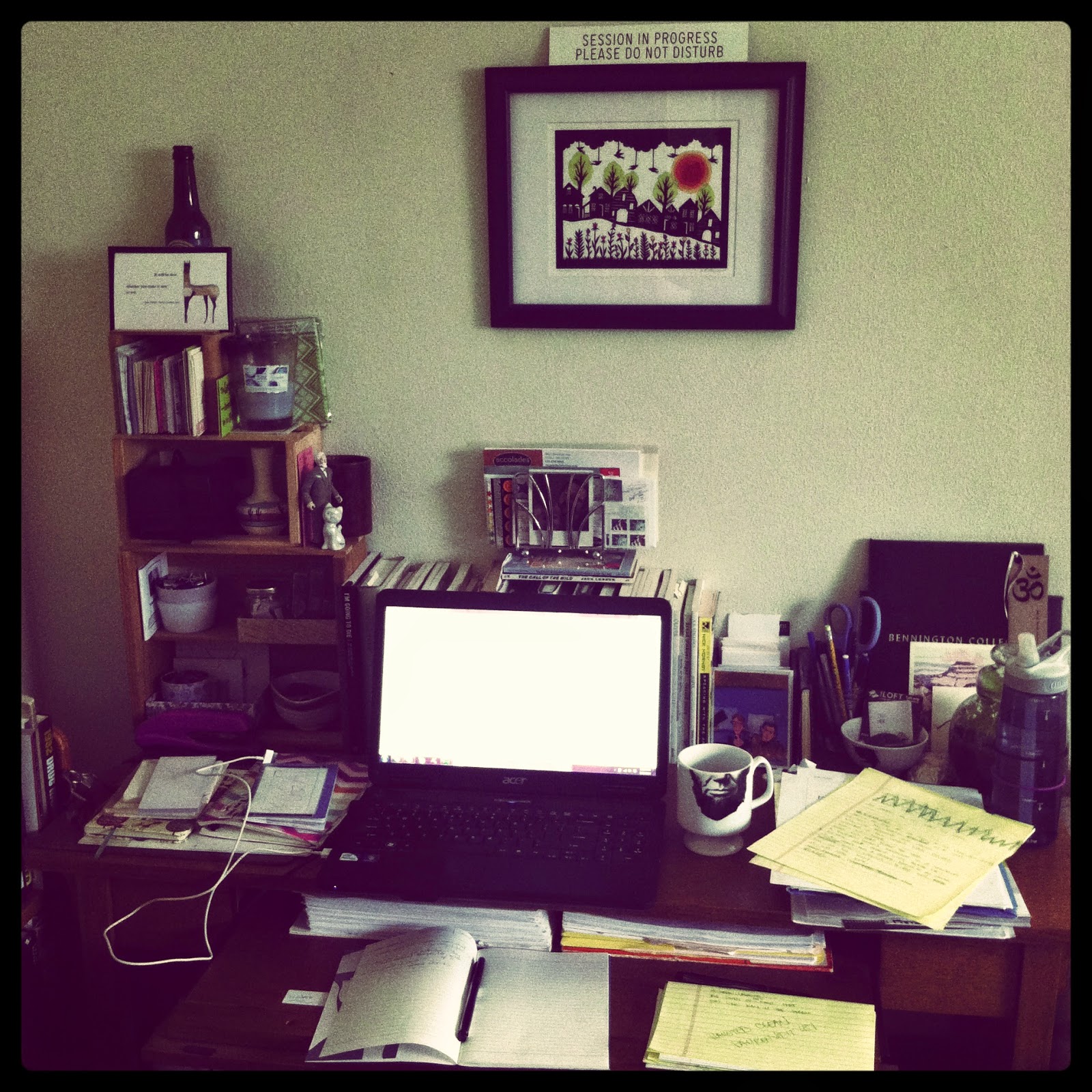 Erica hasn't actually agreed to do this yet, but you should check out her blog either way. I know if I waited for her permission I would get distracted by TV again and this post wouldn't transpire for another 3 months, my eyes glazed over with 3 seasons of Luther and a front to back rewatch of The West Wing.

Anyway, there are four questions here that I'm going to answer, and which Kathleen also answered, and which in theory, Joe and Erica will answer as well. Let's get to it then?

What are you working on?

That's always an interesting question for me, because I feel that the answer could likely be "nothing." I'm not really a planner when it comes to my writing. I do try to sit down and write at least a few times a week, but I don't have plans to finish anything in particular. I have a list of projects I flit between and work on whenever I feel called to. I'm trying to write poems named after each episode of The X-Files (I'm about halfway through season 1, writing-wise). I'm also writing a batch of poems based loosely on French New Wave films. The other thing I'm working on is a series of poems about the weird little town where I grew up. I assume it will be many years before any of these projects comes to a close.

How does your work differ from other writers in your genre?

It's hard to say. When I write poems I'm often inspired by other poets and the work of my friends and the members of my writing group, so I think that my poems are essentially tied to the work of many other writers. But then, I'm super weird (just check out the list of new things I did every day for five months in high school if you don't believe me), and so I think that on a fundamental level my poems are going to reflect my personality: weird. I like to try wacky stuff and write poems about the things that I find myself obsessing over, like stigmata and ghosts.

Why do you write?

I've always been a writer. In second grade I wrote a poem called "FAT TURKY" [sic] in which I plot and execute a Thanksgiving murder (it was a turky, obviously), then eat the victim. In the end of the poem I get sad about having killed it but realize the turky is still alive in my "stumack" and we cut it out with a butcher knife. The details are murky but I don't hold grudges and now I like most birds. Anyway, I'm still writing.

What is your writing process?

My process isn't fancy. I just sit down and write. I pretty much only write poetry. I spend a lot of time thinking about poems and I have a lot of books full of ideas and words that I like. When I have thought about an idea for long enough, I sit down to write a poem about whatever that thing is. Sometimes I spend a long time procrastinating, and sometimes I give up right away. When I don't give up right away, I write a poem. It's either good or terrible. I hardly ever revise poems, because I'd rather just write a whole new poem than spend time making bad poems okay. That's probably the reason I've written about 700 poems since 2007. Because most of them are total crap.