Read Things! Or, Listen to Me Go On and On About Sleeping With the Dictionary 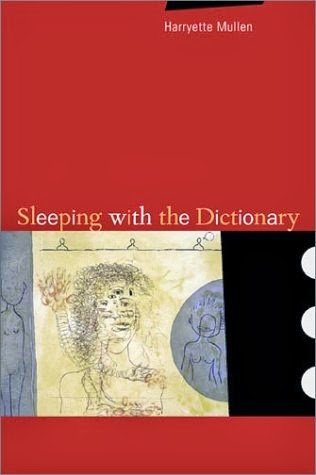 I'm coming strong into my fourth week of quitting internet games cold turkey. No Candy Crush. No Bubble Safari. I blocked all games and game request features on Facebook and I am too dumb to figure out how to unblock them, which is definitely for the best. I told Will that if I say something about internet games, he has to come and forcibly remove my computer from in front of me. I say this because the past four weeks have been productive in ways that I wasn't productive last year. I'm sick of wasting my time doing things that don't serve me.

Since the first of the year, I've already read thirteen books--which, shamefully, is just under the total number I finished last year. I don't want to jinx myself, but jinxing yourself is a chance you've got to take sometimes--high jinx!

Of the ones I've read so far this month, I'm still inwardly (and sometimes outwardly) flipping my lid over one of them: Sleeping With the Dictionary by Harryette Mullen.

The way I came into this book is magical in itself. I was on the phone yesterday with Erica, who's at her very first residency out at Bennington's MFA program (!!), and she told me that one of their workshop prompts was to write a poem in the style of Harryette Mullen. I said to her, "I don't know who Harryette Mullen is." As she was saying these words: "Harryette Mullen wrote a book called Sleeping With the Dictionary," Will came scooting into the bedroom and tossed Sleeping With the Dictionary into my hands. It took me a second to realize what was going on; it was one of those strange moments that is simultaneously mundane and mysterious. Will had checked the book out of the library while I was away a few weeks ago. I took it as a sign.

I spent all day with the book, and it took me a few poems to catch on to what was happening there. The way that Mullen uses language made me literally scream a few times. I read most of the poems aloud, and I didn't want it to end. I'm not surprised at all that Sleeping With the Dictionary was nominated for the National Book Award when it came out in 2002. And about that: how did you, my friends, let me go so long without reading this? Shame on you all! Shame! (I have used up all of my exclamation points for the year in this one blog post.)

The poem I liked most is called Kirstenography, which I assume is written for Mullen's sister. The whole poem is written like the game Mad Gab, or like a child who is imitating language she hasn't quite picked up yet, or like a secret language between the sisters:

When her smoother and farther wrought her chrome from the hose spittle, her cistern fought the piddle ably was a girly heeded bawl.

It's a story of a family, of two girls. The prose poem goes on like this for a page and a half. I can't even tell you how many times I read it. Over and over.

You should definitely read the book for yourself. Mullen uses language in so many surprising, inventive ways, I felt as if I were being let into somebody's secret world, which is probably just one aim of Sleeping With the Dictionary.

Anyway, I'm done rambling about this book, though I could say much more. Find it in your library or buy it from a bookstore. I'll probably end up purchasing it for myself sometime in the near future.