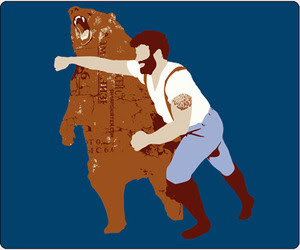 Today is my one year anniversary. I don't have anything profound or sappy to say about it. Time doesn't feel any different now that we're married, just better. I don't want to say I can't remember what it's like to not be married; I do. And not being married was okay, too, for a while. And being married is the best.

In the past year, many things have been accomplished.

We purchased and, shortly after, ruined the game Phase Ten.

We broke into our neighbor's apartment on New Year's Eve to watch the ball drop on his TV. Because we don't have TV.

I yelled at Mexican Music Lady, our neighbor, for playing her Spanish polka too loud during the night.

We stole a couch from a neighbor who got evicted and left his couch. I assume he left it because it's a broken piece of crap.

My chapbook, Ether/Ore, was accepted for publication by NAP.

I got a series of parking tickets for leaving my car on the street overnight.

We played a lot of Settlers of Catan.

Anyway, we did a bunch of other stuff, too, but most of it is as boring as most of the stuff I already told you about.