There have been some developments on many fronts in the Jenkins-Braun household.

We finally are getting around to getting rid of the books we have doubles of, including our Norton Anthologies, and we have had arguments over whose marginal notes are better and for what reasons; most of my notes were argued for because they made jokes about the authors or had funny drawings on the upper righthand corner of the page, etc. Will's notes were generally found thoughtful and possibly helpful for understanding the text. You can see why such arguments occurred.

We're also not wasting any time in replacing the empty spaces in the bookshelf. Just yesterday I purchased Vita Nova by Louise Gluck and Lucifer at the Starlite by Kim Addonizio, both books which I am pretty excited to read. I read the first few poems of Vita Nova last night before I went to bed at 7:30. Which brings us to another development:

I have mono, and have had it for several weeks. It's nice to finally know why I have been a lazy sack of blood lately.

Sidenote: there's a dude outside walking down the sidewalk and he's wearing a skirt. Not like, a kilt either. It's definitely a hippie girl skirt, flowing, earthy, lady skirt.

Okay. Some other things:

Robert Lee Brewer, a blogger for Writer's Digest, held a contest for a poem in form. The poem had to have ten lines, with ten syllables in each line. I submitted my poem and it won first place. So that will be featured in Writer's Digest's September issue. 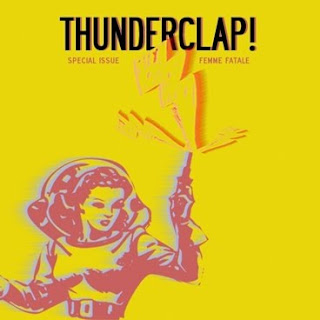 One of my poems got picked up by Thunderclap! Press today, and will be out in their sixth issue (possibly soon?). It's so weird to get so many acceptances right in a row like this.

ALSO! The May issue of elimae went up yesterday and you can find one of my poems there.

Anyway, the only other news is that I'm going to Applebees now and going to get looked at strange by the waitress again when I order a house salad with no bacon bits and a side of garlic mashed potatoes.
Posted by Brett Elizabeth Jenkins at 4:01 PM