Another semester is coming to a close, and I'm putting off the last of my grading by writing a blog post, listening to hip hop, and drinking the hell out of some coffee. The only good thing about grading as one of the biggest proportions of my job is that much of my job, in turn, can be performed in my pajamas. 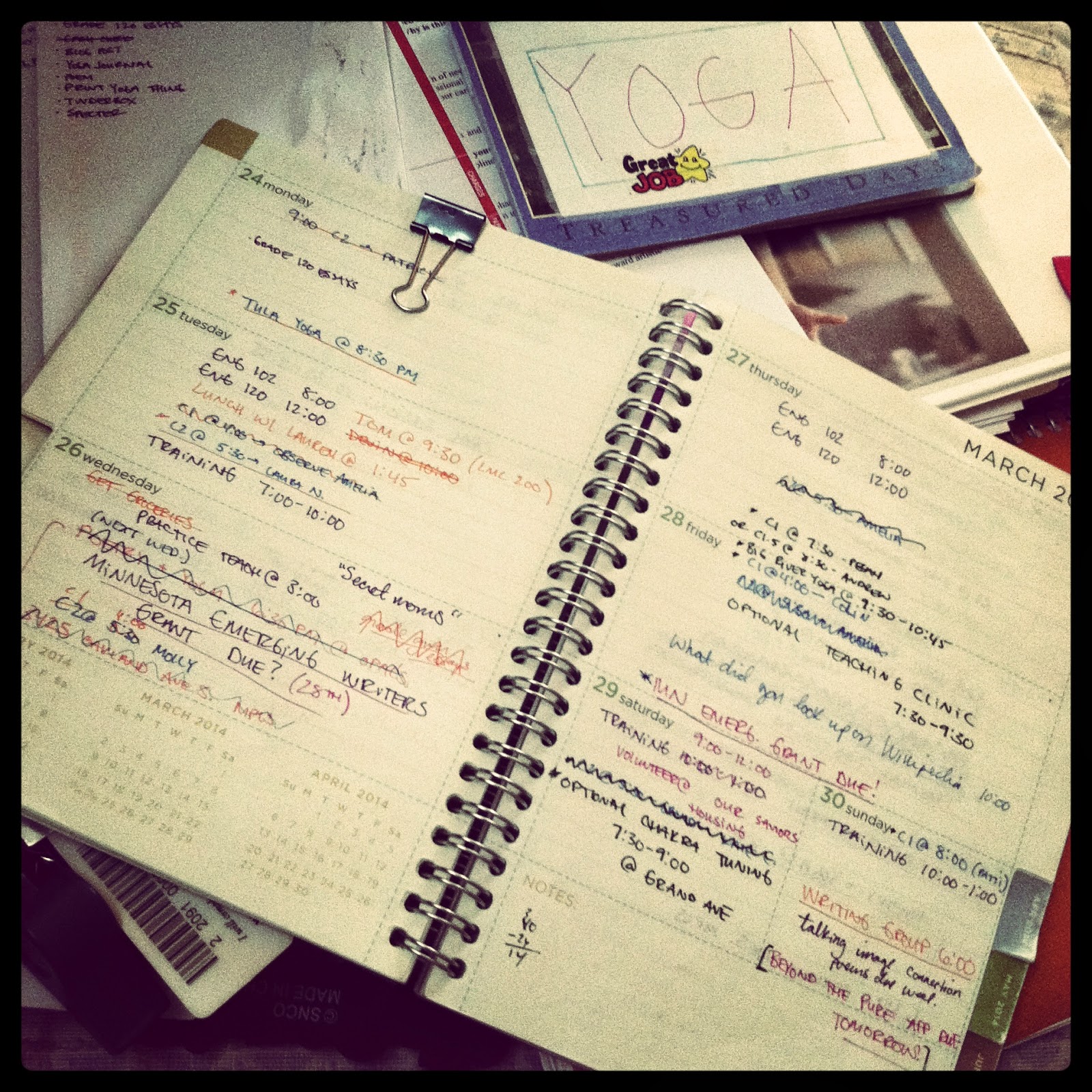 I thought I'd give an update on my new year's resolutions, seeing as it's about a third of the way into the year already (oh crap oh crap oh crap). It's so funny how one of the longest, hardest winters of my life also seemed to fly by the quickest. From mid-February to mid-April, I was chest-deep in yoga teacher training, which is probably one of the crazier things I've ever done. Teaching two writing intensive courses and taking an eight week, 200-hour certification class? And teaching a class at the Loft? And meeting a five-day-a-week yoga practice requirement? And meeting deadlines for some serious grant proposals? And keeping my cool/not flipping my lid? That's definitely something I didn't live up to. My lid was constantly on the verge of being flipped or in total up-in-the-air MEGA FLIP mode. And my planner looked like a novel-in-progress.

But now I feel my life quietly coming back to me. Eight weeks of total chaos abruptly ended, and I'm no longer in yoga seminar ten hours a week. Then I met Garrison Keillor and he read my poem (I plan to make a real post about this later). Then the semester ended, and all I have left is to face some serious freshman paper grading. If I could beat the winter, I can definitely beat some freshman research essays. Though this semester I had the sense to put the kibosh on essays about legalizing marijuana or changing the legal drinking age to 18.

Anyway, back to the resolutions, one of which was to complete a yoga teacher training program and become a certified yoga teacher. Checkmark! Done. My other goals are ongoing, and mostly writing related:

* Do four poetry readings (I've done three this year, actually!)
* Read at least 52 books (I'm standing at 27, though they're mostly poetry books, admittedly, and I read the majority of them during January)
* Write 200 poems (I've written 60)
* Work on a manuscript (I haven't done this at all--thanks for such an ambiguous goal with no tangible steps to tackle it)
* Get 100 rejections (33 so far--right on target!)
* Practice yoga 200 times (I have a sticker chart for this, and it is as motivational to me now as it was in 2nd grade. I've tracked 78 since January 1st)

Those are my big goals and I feel good about sticking to them. In addition to the 33 poetry rejections, I've gotten ten acceptances, too, including one from the Potomac Review this morning! I am definitely digging this acceptance-to-rejection ratio, but honestly it's really mostly luck, I feel like. If I've learned anything from being a poetry editor, it really depends on my mood when I'm reading through submissions. But here's to another eight-ish months of writing and reading and doing more things I really love. Life is pretty cool sometimes. Like, being alive is nice.
Posted by Brett Elizabeth Jenkins at 10:42 AM